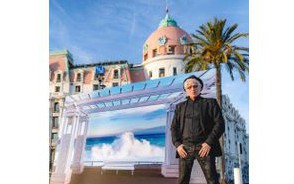 Promenade des Anglais - Under the pergola, opposite the Hotel Negresco

It's now been 10 years since Bruno Bébert, artist-photographer, captured his first Wave!

One stormy day, in November 2011, he went on a report on the Promenade des Anglais for his press agency. While taking his first pictures, he stops under a pergola, in front of the Hotel Negresco. He has the feeling that something is going to happen... And he's right: the swell is rising more and more off the shore. Watching this almost perfect setting, a white bench under the bottom of a pergola, take shape in front of him, he waits. Half an hour later, La Vague swept in front of its lens. He continues his report and on his way home looks at his files. There, he realizes that one of his images is not like the others. Le Figaro Magazine will headline its double-page photo: "This photo is probably one of the most beautiful we have ever published. It looks like a painting by Magritte... Only a painter could normally have invented such a contrast with the fury of the elements, but it was a photographer who captured it. The Wave is born!
This recognition and interest aroused through social networks, among art professionals but also collectors from all over the world, open the way to a new photographic work. Driven by this collective enthusiasm, Bruno Bébert then began a long-term work: from "Chasseur d'images", he became "Chasseur de Vagues"!

For 10 years, with each storm that hits the Côte d'Azur, he goes to photograph his Waves: day and night, from autumn to spring, under the sun or in the rain, with a bench, two benches and even without a bench...

This is a good reason to go for a walk on the Promenade des Anglais!